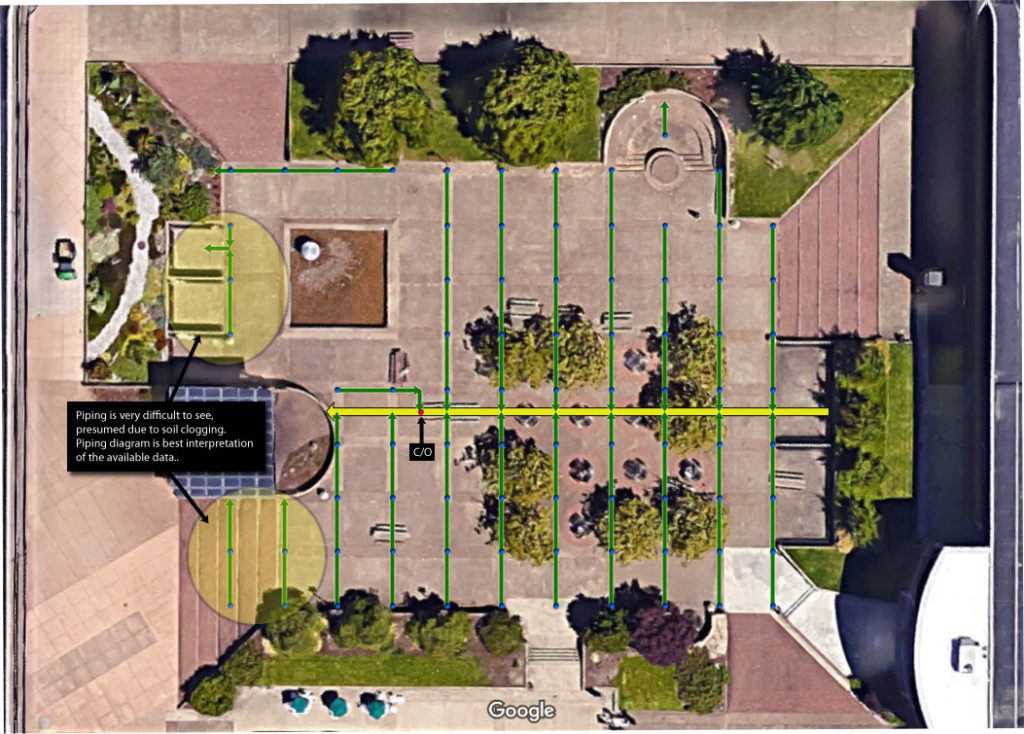 An open air courtyard with approximately 80 drains is experiencing poor flow and water backup from a random assortment of drains.  An adjacent roof drain is backing up as well, and is presumed to connect to the same drainage system.  The subsurface piping and connections between these drains is unknown and has made it difficult to track down (and eliminate) all of the pipe blockages.

Due to weather conditions and access obstructions, it was significantly more cost effective to approach this as a real-time 2D ground penetrating radar GPR imaging project, rather than as a 3D GPR data collection method.  Poor data quality, extreme quantity of wire mesh reinforcing, and heavy soil intrusion into the 3″ PVC pipes created a significant challenge, but it was well within the range of our industry-leading technical expertise.  We quickly located the roof drain, then moved on to the courtyard itself.  Each and every interconnection between drains was checked, verified, and recorded.

The roof drain is not connected to the courtyard piping system as originally believed.  Instead, it flows out into a different vault, past several clean-outs which should help with alleviating the blockage.  It was found to have been redirected around a nearby elevator which had been constructed after the drain was originally installed.

The courtyard drains generally flow north and south to an east/west main service line located slightly offset of courtyard center.  Near the west end of the courtyard, where a fountain and several landscaping features impact the design, the piping gets more erratic and less predictable.  In many areas, the piping appears to be completely packed with mud and debris (this is visible in our raw GPR data).

Concrete GPR LLC came in on-time and within budget to deliver concise, accurate findings.  Our utility mapping provided immediately relevant information to quickly begin solving a recurring problem.  Our client is happy with the findings and we look forward to continuing our service to them in the future.